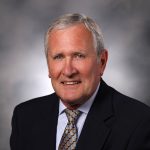 Harry Knopke is currently President of the CLC Board. In 1998, his first year as Aquinas College President, he worked with Dean Jim Garofalo and Chuck and Susan Saur to establish the CLC at Aquinas. He is a recipient of the Honorary Conductor Award from the Peto Institute.

After his retirement from Aquinas he was appointed President of Aqua Clara International, a non-profit NGO whose purpose is to design clean water technologies for use in developing countries. Aqua Clara is headquartered in the MSU Bio-Economy Institute in Holland, and has offices in Kenya and Nicaragua, with the Kenyan operation recognized this past year as a B Corp, the only non-profit in East Africa to achieve this designation. Aqua Clara’s technologies are based on its three patents and now produce over three million liters per day of clean water in more than 30 countries.

Harry and his wife Sheila have one son, Kevin, and one daughter, Anne. The Knopke’s live in Grand Rapids in the Cherry Hill historic district.