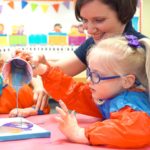 Andrea Swiger, was in the first cohort to graduate from the Aquinas College POHI/CE program in 2005. Immediately following graduation, she began working at Conductive Learning Center. During her time at CLC, she attained an additional early childhood education endorsement in 2012, grew into the role of Senior Conductor-Teacher, and most recently was appointed as Program Director. She is a founding member of ACENA and has served on the board of directors in the past.

Being an active part of the conductive education community has always been important to her, and Andrea has had the pleasure to speak at several CE conferences both within the United States and Internationally. Andrea enjoys working with the children and families at CLC, consulting on CLC projects with other centers within the United States, and serving as a mentor to Aquinas students throughout their lab school practice.