We are thankful for the many wonderful supporters who keep Conductive Learning Center moving forward. We were thrilled to recognize our outgoing and first-ever CLC Ambassador of 2018, Cathy Boyer.
Thank you, Cathy!
Cathy has been a wonderful advocate for our organization through the years, and she continues to build awareness of conductive education in the community. “Because the CLC program is considered to be the finest in the country, it has been an easy job to talk about the miracles that happen every day,” she said.

On Thursday, February 21st, we were excited to announce our 2019 Ambassador: Margaret (Marge) Potter, at our National Conductive Education Day celebration at the school.

Marge has been on the CLC Board since 2016.  She has an extensive list of both community and 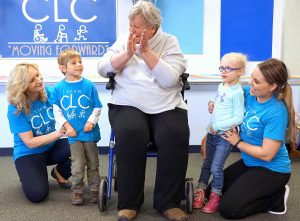 statewide advocacy roles where she makes a direct impact through service.  She serves on a Grand Rapids Public Schools advisory committee for helping to plan Centers of Innovation, and she is a board member at the Progressive Women’s Alliance.  She plays an active role in supporting the Girls Choral Academy, Grand Valley State University Foundation and the Muskegon Museum of Art.  She also holds the Board Chair position for the Spectrum Hospital Foundation.

She has received numerous awards and accolades for her extensive service. She was awarded the Grand Rapids Area Chamber of Commerce’s annual ATHENA Award in 2008, and she was recognized by the Grand Rapids Business Journal as one of the “50 Most Influential Women in West Michigan” in 2010.  She has also been honored by Crain’s Detroit Business as one of the 100 Most Influential Women and has been recognized as one of the Women of Achievement and Courage by the Michigan Women’s Foundation.

When asked what she will do in her role as CLC Ambassador, Marge said, “The board, the community, students, and parents are embarking on a new era by building a new physical structure to benefit all those associated with the CLC. I would like to help make people understand the benefit that will be realized by such growth.” Her words of wisdom which she shared with Crain’s Detroit Business include, “Get up every morning and do what you have to do to make the project that you’re working on successful. … Some days you’re really successful, some days aren’t as successful, but if every day you think, ‘I moved it forward,’ whether it’s an inch or a mile, it’s moved forward toward completion and success.” 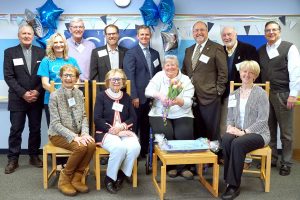